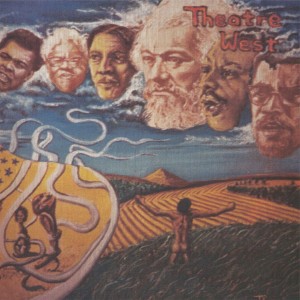 Strut presents one of the most in-demand and significant albums from the archives of Jimmy Gray’s Black Fire Records, ‘Bow To The People’ (1976) by theatre collective Theatre West, based out of Dayton, Ohio.

Founder Clarence Young III was a US Air Force Vietnam Vet who had been part of a theatrical troupe entertaining soldiers in 15 countries during his tour. When he returned home in 1969, he started Theatre West in Dayton, Ohio as an outlet for inner city youth to come together and express themselves. At its height, the company involved around 27 members. “Everybody played everything and did everything,” recalls bassist Sigmond Dillard. “We all had to sing, dance and act all the time. If someone messed up, you came in. It was a tight unit and we were constantly helping each other out.”

“There were so many talented and gifted people in our troupe,” continues Dillard. “Rita Brown went on to New York, starring in the film Disco Godfather during the late ‘70s. Bruce Davis went on to work regularly on Broadway in Chicago, All That Jazz and more. Our Musical Director was Delbert Taylor and he also played with Gil Scott Heron’s Midnight Band and with Slave afterwards in the early ‘80s. Vibes player Ben Wilson and I also played regularly with Gil.”

Recorded at Arrest studios in Washington in ’76, ‘Bow To The People’ brought together songs from several of Theatre West’s best known plays including Bow To The People, The System and Black Love and unflinchingly explored serious issues around drug addiction, mental health and cultural awareness. “The whole idea of Bow To The People was to honour our black forefathers,” explains Dillard. “It was important to do that for the kids that didn’t know.”

Shelved following the original recording, the Bow To The People album eventually surfaced on a limited CD on Black Fire in 1993. Now receiving its first full international release, the album features the previously unreleased tracks ‘Man Of Many Means’ and ‘I Don’t Know Much About Love’.

LP
A1 Searching For Ourselves
A2. Crossroads
A3. Bow To The People
A4. One Little Chance
B1. Children Of Tomorrow's Dreams
B2. Black Love
B3. Big Brother
C1. No More Junk
C2. Della Get Down
C3. I Am A Woman
C4. I Really Like It
D1. Puppet
D2. Man Of Many Means (Previously Unreleased)
D3. Cool Out Your Mind