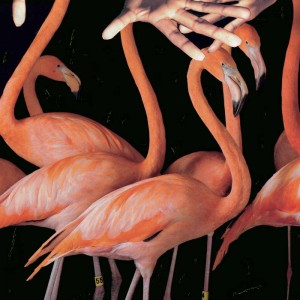 Cyclical chime and post-punk rumble from former Charlottefield man T House, taking in the strange majesty of Lungfish and the dread of The For Carnation. Sweet Williams exists as a vehicle for the creative endeavours of Thomas House (b. 1980, Eastbourne, England). Perhaps best known for the group Charlottefield with whom his unique musical language was developed, House has also been a part of musical projects as diverse as the thunderous gloop of Sloath, the sinister folk of Haress and the bottomless musical universe that is Joeyfat. House’s musical back catalogue could read like a treasure map of underground European music if you wished it to and were eager enough to follow it (you should).

It is one such collaboration that spawned this new Sweet Williams record that you hold here – digitally – in your (virtual) hands. Sick and frustrated with the UK, House and his French partner moved to Zaragoza Spain in 2018 where House had formed a tight relationship with legendary post-punk group Picore (House playing guitar and bass for the group now since 2008). When younger, it is easy to buy into the idea that a band is a gang and roles within are sacred and fixed. This begins as an easy dogma to follow, but as time moves along (and you are moved with it), it becomes impossible to adhere still to those rules. People come and go. Life takes over. This is enough to make most people stop making music altogether. House experienced something of a revelation when it came time to put together Sweet Williams: the limitations of any given time would be embraced and treated as a collaborator, as opposed to a saboteur. Sweet Williams would work like a band, except fate and circumstance would be the only permanent member, the only creative director.

So - this new Sweet Williams record was made in Zaragoza with the instrumental core of Picore as the band. Circumstance and limitations were fully embraced. Participants forced to be open to what was thrown at them. The result is 8 songs recorded almost live, 2 guitars, bass, drums, vocals. The same as Sweet Williams records that have come before but yet completely different. To these ears, there is a greater intensity to the musical interplay, with fewer moments of tranquillity or respite than previous records. The band appears giddy with the excitement of the moment and how spectacular and free they sound together. Awkward rhythms become soothingly pulse-like through repetition. Aggressive guitar clang and dissonance becomes beautiful through inspired interplay, strings ringing out against each other like bells drawn from some uncanny sense memory. A gruff voice is initially interpreted as an aggressor but soon becomes a friend and a guide.

It is a wild ride. Tempting though it is to throw musical comparisons about, this record isn’t really one for genre classification. House seems to be playing a longer game than that. It instead feels like part of a body of work in the great tradition of bands like The Fall or Pere Ubu, or labels such as 4AD or Touch & Go. That’s not to say it sounds anything like those reference points but rather that it’s the latest step of a conscious creative journey that embraces change and fortunes (good and bad) in order to make a body of work that becomes its own genre, despite great variation within. “Of course we’d normally be trying to get you to come out and see us play these songs live. You could replicate the experience by drinking too much, sleeping in your clothes, not showering and then putting the new LP on, about early evening” Sweet Williams

Sweet WilliamsPlease Let Me Sleep On Your Tonight