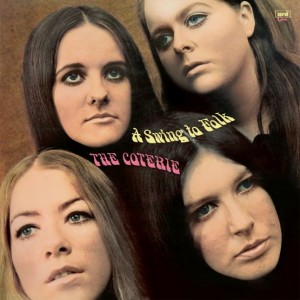 Splatter colour vinyl. The Coterie was an ephemeral folk group from Dimnagh, a southern suburb of Dublin, with hippy and psych touches from the late 60s. They were signed by Emerald at around the age of 18. This label, which released folk music among other genres, had a distribution relationship with Decca until shortly before the latter was taken over by Polygram. Emerald released a single and the group's debut and only LP, "A Swing to Folk", a captivating record with simple instrumentation, beautiful vocals and harmonies that transport us to pastoral surroundings full of calm, peace and love. The record has 11 tracks, most of them cover versions (including songs by the Beatles, Phil Ochs and Judy Collins/Leonard Cohen) and a couple of traditional folk arrangements. All the songs are performed in a simple, candid style that makes listening to them an almost mystical experience, supported by gentle guitars and keyboards in the background. Lack of promotion and slow sales of the record meant that The Coterie did not accomplish everything they deserved, and the group disbanded and fell into oblivion until now! "A Swing to Folk" returns to life, to envelop us with the warmth, gentle simplicity and beguiling melodies of its tracks. Reissued now for the first time, over 52 years after its original release.