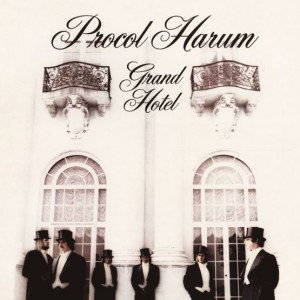 Esoteric Recordings is proud to announce the Record Store Day 2021 release of a strictly limited edition newly re-mastered 180 gram white vinyl LP edition of the acclaimed Procol Harum album Grand Hotel. Released in March 1973 the album was the first to feature a line-up of Gary Brooker (piano, vocals), Alan Cartwright (bass), Chris Copping (organ), Mick Grabham (Guitars) and B.J. Wilson (drums) and was remarkable for its musical diversity and was hailed as A masterpiece of musical perfection and lyricism by the NME weekly music paper. From the sumptuously orchestrated title track, to compositions such as For Liquorice John, Fires (Which Burnt Brightly), Bringing Home the Bacon, Toujours LíAmour and Robertís Box, Grand Hotel defied classification but remains one of Procol Harum's best loved and most admired works.

This Esoteric Recordings edition has been newly re-mastered from the original album master tapes and was cut at Abbey Road studios. The limited-edition LP release fully restores the stunning original gatefold sleeve and the deluxe lyric book which came with initial copies of the album.