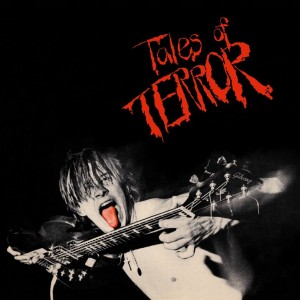 
1500 copies pressed on Red vinyl, A5 Flyer & DL card. "Straight out of The Dead Boys / Stooges school of intense, f**k-it-all, snarl and self-destruct. Recommended." Maximumrocknroll. Often cited as a major influence on the key bands of the grunge era (Nirvana, Melvins, Mudhoney etc.) Tales Of Terror's one & only LP is an overlooked classic of 80s NorCal punk rock. Available for the first time in more than 30 years, Kurt Cobain's 32nd-favourite-album-of-all-time is chaotic and charismatic in equal parts; the band's story is tinged with tragedy, but the music they played was life-affirming. Wild, heads down proto thrash metal meets punk excess; think early Guns n' Roses meets Iggy at the bar from a band whose trajectory was cut short after the death of guitarist Lyon Wong in 1986. A cobweb dispersing buried treasure that stands alongside the debut of The Damned and draws a shaky line through grunge to At The Drive In and way beyond. A super rare release, unavailable for over 30 years; remastered and ready to be cranked up to full volume. "Mid-tempo driving grunge rock that gets pretty chaotic" reported Flipside.