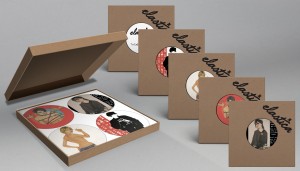 The box set named singles is a reissue of the first 4 UK 7" singles and a bonus 7" specially chosen for RSD. 10 tracks altogether. This is the first time the original limited addition artwork work has been reproduced since itís release. Now for the first time theyíll be boxed as 1 unique limited collectors edition. The band are huge supporters of RSD having already released the first album Elastica and a BBC sessions album on the same day in previous years. It feels fitting that the Box set should also follow in their footsteps. The original singles were initially released in small limited numbers, because of this they sold out immediately making it difficult to purchase a copy. The singles all reached indie number 1's and top 40 chart positions. The numbering on the original sleeves we're individually printed by ourselves one evening after rehearsals.