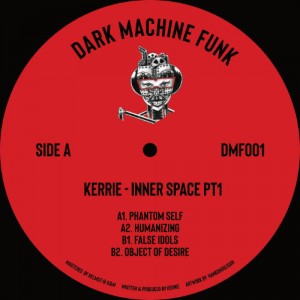 Most of MCR and indeed beyond's techno community know Kerrie from her time spent behind the counter of Eastern Block and as active a DJ on the scene as anyone. Regularly playing the faster tempo clubnights of Manchester and a near permenent fixture at Free Rotation, she has years of experience with mixing the dynamics of techno on two (or three) turntables and a mixer; so it's delightful to see the produce of her relatively new passion - conjuring up original techno via hardware based tools - finally get released on lovely vinyl.

With a distinctly DIY approach, and succeeding a few scarce but well received digital appearaces, Kerrie launches her own imprint - Dark Machine Funk with four tracks from her burgeoning datastore of beats and blasts.

Anyone who's witnessed her DJ knows that she exudes energy with her own unique character - able to bang out hard rhythms with a seemingly fun-loving, carefree attitude and original swagger. Well, she seems to have kept true to this formuar across the EP - this bangs hard folks! But the fun is never lost! "Phantom Self", wrapping the madest synthesized buzzes and squarks around a rampant, rib-tickling b-line and headsplitting modular elements - tidy! "Humanizing", with its heartfelt Millsian elements, rides a taut line of discord and rhythm until erupting with a tasteful climax towards the end. "False Idols" rumbles and buzzes with all the urgency of Blawan and the whole VOAM movement - hi-tek new techno which pushes the system to the max - yes Kerrie! "Object Of Desire" concludes with some eyes-down, lost in the smoke business perfect for the post-peak hours when everyone's just that little bit looser!

Matt says: Techno stalwart from E-bloc and one of my personal favourites from their esteemed roster of DJs inaugurates her own label with a four track blast of pure pressure! Honestly techno heads - you need this!

A1. Phantom Self
A2. Humanizing
B1. False Idols
B2. Object Of Desire