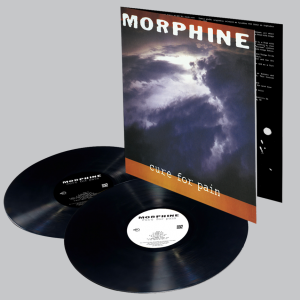 One of the most unique, original and unusual rock bands to burst onto the alternative scene in the 90s, Morphine was originally formed by vocalist/bassist Mark Sandman, saxophonist Dana Colley and drummer Jerome Deupree (later replaced by Billy Conway) in Cambridge, Mass in 1989. They expertly combined blues, jazz and rock elements into a very distinct style, anchored by Sandman’s deep, crooning, beat-style vocals. Rather than having an electric guitar as the focal point like most rock bands, the trio’s sound was built around Sandman’s two-string electric bass (often deployed with a slide) and Colley’s growling, baritone sax which was dubbed as “low-rock.”

Cure For Pain is the band’s second album for Rykodisc, originally released September 14, 1993. Jerome Deupree, quit due to health problems during the recording of the album and was replaced by Billy Conway. The tracks “Sheila” and “In Spite of Me” were prominently featured on the soundtrack of the 1994 independent film Spanking the Monkey. The video for “Thursday” also appeared on an episode of Beavis and Butt-head. The track “Buena” also appears in the first season of The Sopranos and in the Daria episode “The Teachings of Don Jake.” In 2014, the album placed eighth on the Alternative Nation site’s “Top 10 Underrated ‘90s Alternative Rock Albums” list. As of 1995, it has sold 107,000 copies in the US and over 300,000 copies worldwide.

LP1
Side A:
Dawna
Buena
I’m Free Now
All Wrong
Candy
A Head With Wings
In Spite Of Me

Side B:
Thursday
Cure For Pain
Mary, Won’t You Call My Name?
Let’s Take A Trip Together
Sheila
Miles Davis’ Funeral