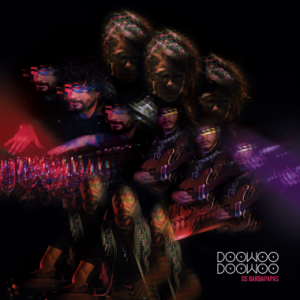 Record Label
Fun In The Church

Ready for take-off: Brazilian psychedelic quartet Os Barbapapas will release their first record DooWooDooWoo 14th May. Berlin-based record label Fun In The Church celebrates an LP release perfectly in line with their motto “Outernational Music For Interplanetary People”: DooWooDooWoo by Os Barbapapas will be the international debut of a highly talented band straight from the hip psychedelic scene in São. São Paulo meets Berlin – contemporary interplanetary diplomacy at its best. The result is a wondrous trip propelling us into outer space, to a lyrically unmanned space station where instrumental needles pierce the membrane of our planetary horizon, making way for a holistic psychedelic experience of our world.

Our tour guides are Barbara Mucciollo (Drums, Percussion), Selva Rubens (Electric Guitar), Fernando Lima (Percussion, Drums) and Tomás Oliveira (Glass Harp, Bass), who is also responsible for production and mix. In times like these, producing a record like DooWooDooWoo is not a trivial thing at all, especially in Brazil, where Covid struck hard. The four artists had to improvise: since the initial plan to record an album in a studio was made impossible, the already drafted songs where postponed in favor of a new concept. Everyone recorded ideas for themselves, to which the others would contribute their tracks later, eventually building the 13 track-long interstellar journey that is the album. Collective improvisation chronologically untangled.

Though DooWooDooWoo was created in physical distance, the LP still became a 25-minute-long monument to the extraordinary vibe of the band. Its unpretentious and playful sound can only originate from the natural bond of those who speak the same musical language. And while listening to the first bars of the album and asking oneself if this could also be The Residents or Hermeto Pascoal producing Khruangbin’s next record, one has already been befallen by the spell of the four Brazilian mages. At the very latest, the third song “Sanga” will draw in even the most reluctant sceptic, when Selva Rubens sounds his self-made pot guitar. Welcome to the desert jungle. Here, Tropicália meets exotica. Space meets desert. Surf meets western. The evoked visions maintain their wonder throughout the whole album, supported by the varied rhythms of the two drummers Mucciollo and Lima, who alternate skillfully between funky grooves, electronic sounds and classic percussion patterns, awarding the album a continuous flow. Brought together with Oliveira’s science-fiction sounds produced by his Glass Harp and the absence of vocals, they unfold a hypnotizing force that seems to slow down time. This unique sound is glued together by Selva Rubens’ guitar, always present with twangy melodies and reverberating harmonies. That way, Os Barbapapas weave us a sound that could only have been created in the cultural melting pot that is São Paulo. All the more exciting that Fun In The Church will deliver us that sound on vinyl. The recording process has been a lifeline to the four Brazilians in Covid-induced isolation. Tomás Oliveira writes: “It’s been a great source of good mental health and daydreams”. This feeling perforates the music. And sounds truly outernational!