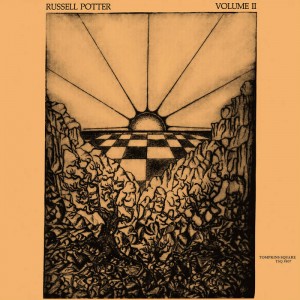 The latest in a series of reissues spawned from Imaginational Anthem Volume 8 : The Private Press, following Tom Armstrong - The Sky Is An Empty Eye and Rick Deitrick - Gentle Wilderness/River Sun River Moon Reflections on Russell Potter by IA8 co-producer and poet, Michael Klausman : The two latest reissues to spin off from our acclaimed Imaginational Anthem Volume 8: The Private Press feature the solo guitar compositions of Russell Potter, recorded in the last waning days of the initial American Primitive explosion. A then obsessed teenaged devotee of John Fahey, Robbie Basho, and Leo Kottke at a time when Punk and New Wave were ascendant, Potter harnessed a similar DIY ethos to his own ends by starting his own label & self-publishing his first record, 'A Stone’s Throw’, while a freshman enrolled at Goddard College in Vermont in 1979.

Assembled at the legendary Boddie Records in Potter’s hometown of Cleveland, Ohio, and sprinkled liberally with references to his heroes, from the initial record label name of Fonytone (which more than a little recalls Fahey’s earliest record label, Fonotone), to the arcane song titles and references to obscure rags. Even as he looks to his elders, Potter’s debut release nimbly evinces a complete mastery of his form and is all the more remarkable for one of such tender years, as only the chutzpah of youth can account for such moves as successfully grafting one of your own composition to one of John Fahey’s, as he does here. There’s a very immediate, lovely, and real homespun quality to Potter’s chiming twelve-string compositions that puts it in the realm of those classic records that seem to simply exist outside of time. Shortly after ‘A Stones Throw’, Potter produced & released a 45rpm single by an Ohio bluegrass band featuring the cult singer songwriter Bob Frank performing a cover of Devo’s ‘Mongoloid’, before moving on to his second (and sadly final) album the following year, ‘Neither Here Nor There’. Following an independent study with a Goddard College ethnomusicologist, Potter’s compositions and performance only deepened on his second release — the recording quality steps up a little but loses none of the immediacy, the playing gets more exuberantly virtuosic —but then more reflective too, particularly on the tunes that are influenced by the gorgeous traditional Irish slow airs.

He’s still tipping his hat to Fahey occasionally as well, this time with an audacious electric guitar setting of the classic “Dance of the Inhabitant of the Palace of King Philip XIV of Spain.” Though these albums landed at a time when American Primitive guitar music’s 1960s & 1970s heyday was in the rear view mirror, they absolutely look ahead to the genre’s eventual 21st Century resurrection, anticipating both in form & content many of the same concerns you find in the great contemporary work of the last two decades by Jack Rose, Glenn Jones, Daniel Bachman, et al., and as such provide about as fine a stepping stone between these two eras as you’re likely to find