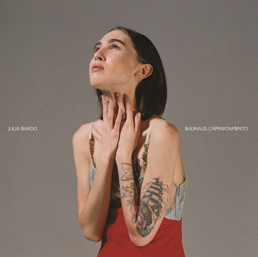 Produced and mixed by Younghusband’s Euan Hinshelwood, the record firmly establishes Bardo’s musical adventurousness and prowess, and marks a cathartic and self-affirming moment for an artist who found her voice by realizing it's been there all along.

The album is best summed up by the woman who wrote it all: “Bauhaus, L’Appartamento is about loneliness, solitude, separation...but also unconditional love,” Bardo reveals of the record’s overarching themes. “Family, emotional dependency, mental health issues, feelings of emptiness and numbness, feelings of not being enough, inability to be in control of my own emotions, self-doubt, self-reflection, past traumas and dealing with them.”

Named after the apartment complex she lived in when demoing the album’s recordings, but with an Italian twist.

Follows the release of two EPs, Phase and The Raw EP, which saw her experiment further with her wistful and mysterious sound to become the alternative pop artist she is today.

Her musical journey began in Brescia in Northern Italy, where she sang and wrote lyrics for a local band between shifts at her father’s bar. A free spirit craving new inspiration, she relocated to Manchester and it was here she developed her striking style as a solo musician before also meeting and joining post-punk band Working Men’s Club. Never losing her strong desire to have full creative control over her music, she returned to become a solo artist again.