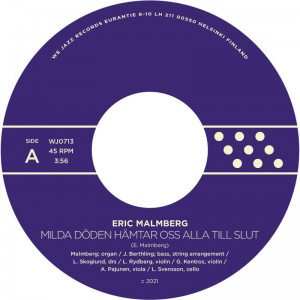 We Jazz Records is delighted to present the first ever vinyl release for two modern classic tracks by Swedish organist Eric Malmberg. Originally released in 2007 by the label Häpna on Malmberg's second solo album "Verklighet & Beat", the pair of tunes herein serve as proof of Malmberg's remarkable artistic vision, echoing both the pure pastoral beauty and the irresistible groove of his work. This release, part of the ongoing 7" series by We Jazz Records, follows the label's Artistic Director Matti Nives's 10+ years of obsession with the aforementioned Malmberg album after an initial chance encounter with the side A track on a WIRE Magazine compilation in 2007.

"Eric Malmberg's music is a small miracle. I don't want to call him a genius, because I don't want to jinx him. But I will say that he's a complete original, in addition to being a vastly talented musician. I will also say that his recordings and the two performances that I saw by Sagor & Swing merit a place on a short list of most enjoyed musical experiences of the last half decade. I could bleat about the quality of the work, but "most enjoyed" to me carries the stronger charge." – David Grubbs, New York, March 2007

"A special mention needs to go out to the phenomenal and totally bonkers 'Till minne av Lilly Lindström' a track which starts with a clean break, builds into dancefloor abusing Hammond-hammering mayhem and then ends up with lush string orchestrations and disco-lite sweeps. Insane and more enjoyable than you could possibly imagine - an album to totally lose yourself in, and one for anyone looking for something just that little different. Huge recommendation." – Boomkat

The DoorsWaiting For The Sun