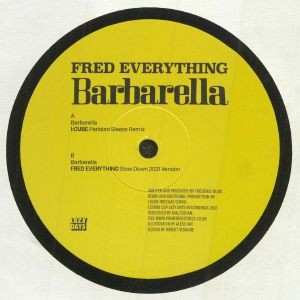 After spending some time on the Adriatic coast of Croatia, Fred wrote his 2018 album "Long Way Home". "Barbarella" was one of the songs on the album. It was inspired by a morning set he did at Barbarellas, the infamous outdoor venue in Tisno. The kitsch disco vibes are also a wink to the cult B-movie of the same name. But it was the "7am in Tisno” mix, featured on the alternate version of the album "No Way Home" that made the song popular.

While there was no plan to release it as a single, Fred had the idea to contact I:Cube, one of his all-time favourite producers, to see If he would be interested in remixing it. The process took a little while but thanks to confinement, with more available time in the studio, the I:Cube Parisian Sleeze Version was born. Taking only a few elements from the original, he completely rearranged the track into a modern disco classic as only the Cube can do. This is one of those cuts that gets better every time you hear it.

On the B-side, "Fred’s Slow Down 2021 Version" expands on the Balearic vibe at a slower tempo. Sounding a little bit like Sade on acid, with added samples from the 1968 Jane Fonda movie.

A1. I:Cube Parisian Sleeze Remix
B1. Fred Everything Slow Down 2021 Version