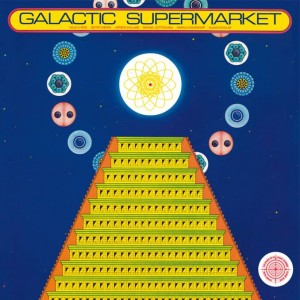 1974. The Cosmic Jokers were basically Klaus Schulze, Manuel Göttsching, Harald Grosskopf and various Ash Ra Tempel and Wallenstein members doing late night jamming. Galactic Supermarket is one of them, and is more rock-oriented than many others. It's no surprise the music bears more than a passing resemblance to Ash Ra Tempel, because of Manuel Göttsching and his guitar playing. Also Jürgen Dollase gives some nice keyboard work, particularly the piano, Farfisa electric piano, synths, and even a little Mellotron. Klaus Schulze were more responsible for the more droning organ and synth end of things, it's pretty obvious when he plays it. The legendary producer Dieter Dierks plays Bass on these nearly never ending improvisation. The recording was transferred from the original analog tapes at the Dierks Studios in Germany. And carefully remastered for an incredible result. Released on the label "Kosmische Kuriere" (Cosmic Couriers)