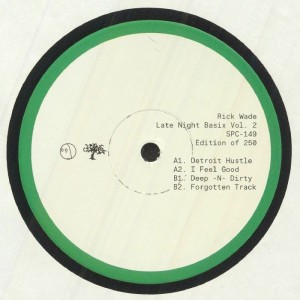 Wade has released on classic labels such as Moods & Grooves and Track Mode and in recent years has found new life on up and coming imprints like Shall Not Fade. It’s arguable that his hybrid sound could be chalked up to his outsider status, stuck between worlds of sound. Rick grew up in the farming town of Buchanan, Michigan, and was informed by the radio of nearby Chicago. The transmissions of house, as well as Detroit techno, set his mind ablaze. When finally moving to the city, Wade started working in the Dance Room at Detroit’s Record Time shop in 1993 alongside a cast of the city’s most esteemed DJs and producers including Mike Huckaby, Claude Young, and Daniel Bell.

Wade had been developing his sound in the regional bass (booty or Ghettotech, in Detroit parlance) sound and an alias Big Daddy Rick (thanks to Ectomorph’s BMG), gaining favor as both a bass and hip-hop DJ. But it was Wade’s friend Dan Bell who encouraged him to put out the house music he was making, and later the two of them established Harmonie Park, Wade’s label, which became one of the most beloved Detroit imprints of the decade. The late Mike Huckaby encouraged Wade to start getting his music out, and quickly. “Whatever moment in time and space you are in...you need to put out your best stuff,” Huckaby implored. Huckaby acted as 'the network' for Wade’s music, helping spread the word and making sure the right DJ’s had it.

After releasing two EPs from Huckaby next on Harmonie Park and an EP, "Night Trackin’" on Bell’s new Elevate label. Wade returned to his own imprint, the second of which is 1998’s Late Night Basix Vol. 2. The release seems to reflect all sides of Wade’s house trademarks - from “Detroit Hustle”’s classic house sound, to the disco-tinged “I Feel Good,” and the brooding soul of “Deep-N-Dirty.” “Forgotten Track,” named by Huckaby, is the closer. Pitch-perfect sunrise music, joyous and sad all at once.

'At the shop, we would try to trick each other all the time. We wouldn’t tell each other what we were playing, especially if it was our song. The goal was to make each other’s head nod, and whenever me or Huck would play one of our own tracks, if either of us was bopping our head, we would say: “I got you.'