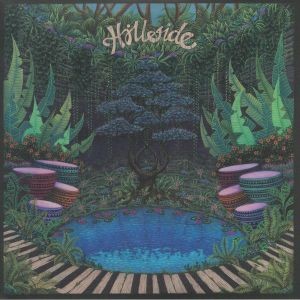 In the midst of a global pandemic that has seen gigs, club nights and festivals cancelled, and tens of millions around the world in some kind of lockdown or quarantine, the need for musical escapism and aural daydreaming is greater than ever. It was this search for creativity and positivity that led to the recording of Sunday in June, the gorgeous and sun-kissed debut album from Hillside.

The outfit’s origins lie in the ongoing friendship and musical relationship of guitarist/bassist Alex Searle, percussionist Patrick Dawes and Claremont 56 founder Paul ‘Mudd’ Murphy, a trio who have been playing on each other’s records since the dawn of the millennium. They began jamming and creating instrumental music together for what would become the Hillside project a few years back, but the pace of production increased during the pandemic year of 2020, with multi-instrumentalist, composer and arranger Michele Chiavarini (an experienced solo artist and long-term member of Dave Lee’s Sunburst Band) coming on board to help shape the sound of their eight-track debut album.

Built around warm, languid grooves, expansive musicality, simmering strings – arranged by Chiavarini and replayed live by Pete Whitfield – and seductive solos provided by a handful of guest musicians (most notably flutist Tamar Osborne and violinist Mike Piggott, who has previously worked with Ralph McTell, Pentangle and Bert Jansch), Sunday in June could be considered an imaginary soundtrack to a long, lazy drive down the U.S West Coast.

The collective’s intent is exemplified by stunning opener and title track ‘Sunday in June’, where soaring strings, eyes-closed guitar solos, expressive keys and subtle percussive touches seemingly dance atop a sun-soaked groove that sits somewhere between jazz-funk and vintage West Coast rock. It can be heard, too, on the low-down hustle of ‘Trinity Strut’ – think Steely Dan doing Blaxploitation movie funk and you’re close – and in the languid drift of ‘Aguila Negra’, with its heart-aching orchestration, jazzy guitars and sunset-ready synths.

Sunday in June has many subtle twists and turns. Check the swelling, flute-sporting, organ-rich breeze of ‘For Daniel’, a track written in tribute to an old friend of Murphy’s who passed away in 2020, and the kaleidoscopic, smile-inducing positivity of ‘1939 Grand Avenue’, whose title references the address of a favourite San Diego hang out. There’s also room for recent single ‘Walpole Days’, a gorgeous downtempo odyssey, and a new album mix of the combo’s most Steely Dan-esque cut, 2019 single ‘Hidden Port’.

Rounding things off is a rather impressive bonus cut: a previously unheard ‘Spiritual Healing Mix’ of ‘Walpole Days’ by the great Joaquin ‘Joe Claussell’. Whereas his previously released versions of the track were largely percussive and dancefloor-friendly, this interpretation takes us deep into the world of weightless new age ambient, with Hillside’s impeccable instrumentation slowly rising above immersive chords and pads.

As usual with Claremont 56, the album’s artwork is every bit as detailed and painstakingly crafted as the music, with the stunning cover illustration coming courtesy of regular label collaborator Mark Warrington. His vibrant vision is naturally a perfect fit with Hillside’s colourful and emotion-rich music.

Patrick says: If my memory serves me correctly, Claremont's remit is 'releasing beautiful music', and they don't come much prettier than this sublime slice of deliciously drifting Balearic business. Shades of ambient, jazz and a sizable spliff in Formentera.