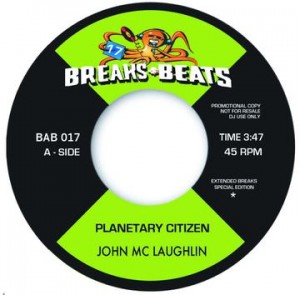 Remember kids, Breaks & Beats do NOT fuck around. Never has this been more evident than on this FIRE extension of the WILD "Planetary Citizen" by John McLaughlin - the jazz funk monster which provided the "hey hey heeye hey" for Massive Attack's "Unfinished Sympathy". Thing is, though that sample spot is most fulfilling, it's the killer basswork, clav madness, guitar and groove which makes this one a must have. On the flipside, La Pregunta's 'Shangri La' is a gloriously cheesy bit of cruise ship disco which just happens to boast one of the fattest breaks ever. Hip Hop heads will know it from LL Cool J's "Breakthrough".