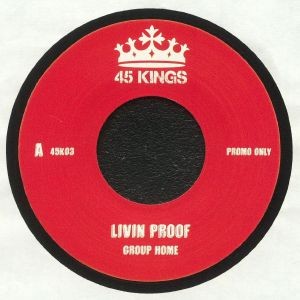 Jamal Felder aka Melachi The Nutcracker and James Heath aka Lil' Dap are a duo from New York City who first appeared in the hip hop world as guests on Gang Starr's 'Daily Operation' and 'Hard To Earn' albums. They went on to put out six well received albums and work with the legendary DJ Premier on production. These two tunes come from their debut record and were two of the best. 'Livin Proof' has the edgy synth sounds, the deep and dusty beats and deft scratching which are all pure 90s but still resonate. On the reverse, 'Supastar' is a more party starting feel good jam with plenty of atmosphere and catchy hooks.

A1. Livin Proof
B1. Supastar