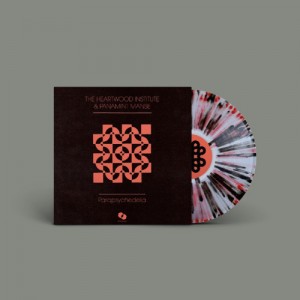 A necessary repress of the debut album which immediately sold out on its release in March 2020. The Heartwood Institute and Panamint Manse forge a collaboration made between the Cumbrian Lake District and the Mojave Desert. “A Jeff Wayne’s War Of The Worlds for the Black Mirror generation” - Stewart Lee.

Jonathan Sharp of The Heartwood Institute and Wayne P. Ulmer of The Panamint Manse join forces to create this wonderful album of earthy, organic electronic music, weaving in sampled spoken passages. the LP takes inspiration from an exploration of obscure paranormal mental and spiritually occult spaces, reflecting that despite present day cynicism, there can be and still is a mystery behind the simplest of things. Says Wayne, “It's easy to be cynical about the magic of existence, and I think in a way we were trying to occupy a space that allowed for some wonder, the ability to just not know. We wanted to make a reminder that these idea states we so often 'grow out of' are not only still present but worth exploration.”

So, magically inclined, work began from their individual locations of beautiful isolation. Jonathan hails from Cockermouth in the Lake District and Wayne in the beautifully scorched Mojave National Park. Panamint City is a ghost town in the Panamint Range, near Death Valley, California. Despite the extreme locations, the electronica here is delightfully warm and humanist in its construction.

The collaboration was initiated by exchanging “a few sketches”, trading them to see what might pan out. The parapsychology influence started to take shape as tracks like “Clairvoyeurism” and “Zenner Cards” were written. Wayne again, “I sent “Zenner Cards” first, and was floored with how radically different and fresh it sounded when it came back from Jonathan - retaining the essence of my melodic phrases but with a widescreen handle on the vibe I was aiming for. After that we would send sketches back and forth working on bits, talking about notes, directions and intuitive feelings. We used a lot of analog synths, cassette recordings, a smattering of altered samples and a big book on Parapsychology from the Panamint College library.

“Parapsychedelia”, features a superb Nick Taylor sleeve design with a full colour inner sleeve and a Mobius Group information flyer. What would YOU pay to see the future?

“Ghosted with a darkly beautiful aura that is simultaneously distanced and locked in a forgotten 70’s” - Mark Barton, The Sunday Experience.

Barry says: Coming from the increasingly essential Castles In Space, it's no surprise that this LP looks stunning, and knowing both The Heartwood Institute and Panamint Manse, it should come as no shock that the sounds within are just as beautiful. Hypnotic synth, spoken word and shadowy post-apocalyptic ambient await you in this wonderfully inventive, constantly bracing journey.

A1. Clairvoyeurism
A2. Zenner Cards
A3. Time Lapse
A4. Black Ant, White Magic
A5. Violet Dust
B1. Precognition
B2. Mesmercuria
B3. Amaranthracine
B4. Etching Mirage
B5. Onyx Oracle
B6. Plantasia