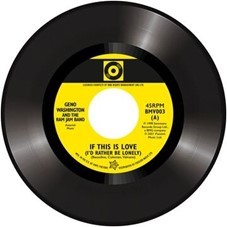 Geno Washington needs little introduction to the UK Soul/Mod scene. In his heyday, 1966-68, he was, reputedly, the highest-paid performer and certainly THE most in-demand live act in UK club-land. He was the closest you’d ever get to hearing Wilson Pickett or Otis Redding live.During his flurry of recording, Geno and the Band laid down their version of “If This Is Love (I’d Rather Be Lonely)”, originally cut by The Precisions earlier in 1967. The song probably came to their attention via one of the many publishers based on Denmark Street, London’s Tin Pan Alley, but, for whatever reason at the time, it remained in the can and has eluded a vinyl release ever since… UNTIL NOW! Which leads us nicely into our double-A side “The Drifter”, another Pye recording that has languished, unreleased, until now. The song, a true Northern Soul icon, was originally recorded in America in 1965 by Ray Pollard for United Artists. It scored a UK release the same year where it was picked up by Long John Baldry, who cut a very credible version on his album Looking At Long John Baldry and also a highly collectable United Artists single. This version was recorded by the unknown Stuart Smith, who has had to wait over 50 years for his 2 minutes and 54 seconds of fame!