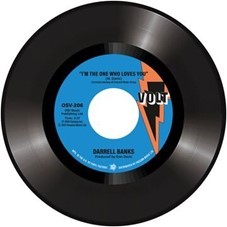 Darrell Banks is a bona fide Northern Soul legend alongside the likes of Frank Wilson, Major Lance, Jackie Wilson, Gene Chandler etc. His iconic 1966 Revilot single “Open The Door To Your Heart” / “Our Love (Is In The Pocket)” is one the most played, collected and revered 45s on the scene. In 2014 a black & silver UK London stock copy of the record was discovered and put up for auction. It had long been remoured to exist but had evaded every serious UK rare soul collector. It achieved a staggering £14,000 finishing price and further cemented the legendary status of both record and artist. In 1969 Banks signed to the Volt record label and recorded one album, Here To Stay, and two singles. Here we present his classy crossover 45 “I’m The One Who Loves You” in glorious stereo coupled with the album-only cut “Forgive Me” available for the very first time on 7-inch single. These recordings would be his last, within weeks of completing the album he was shot dead by off-duty police patrolman Aaron Bullock during an altercation with Banks’ former girlfriend Marjorie Bozeman.