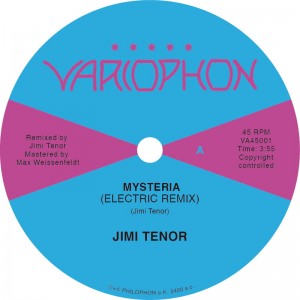 Variophon is Philophon's newly established sub-label. As the name suggests, Variophon is designed to release variations, or more commonly expressed, remixes of songs taken from the Philophon catalog. The beginning on Variophon makes the all around the world beloved Jimi Tenor by remixing himself.

Jimi has chosen one title each from his two albums released on Philohon. From his first, "Order of Nothingness", it is the gently dancing "Myteria" and from his recently released "Aulos" the driving "Vocalize My Luv" (featuring Florence Adooni and Lizzy Amaliyenga). He electrified both pieces in his own very personal, subtle way in order to achieve what he does best: make people happily dancing!

Millie says: Electric Remix work their magic on two Jimi Tenor tracks and transform them to disco to blast out on the dancefloor. This is going to fly so don’t hesitate!