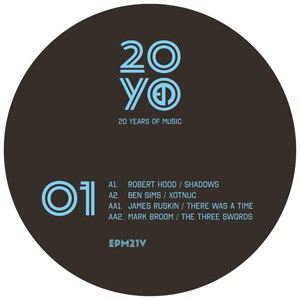 The first of these EPs focuses on techno and presents new tracks from four of the world’s leading techno artists, Robert Hood, Ben Sims, James Ruskin and Mark Broom. The choice was an easy one for EPM, not only because of the artists’ excellent production skills but also because of a long working relationship, which includes the distribution of their respective labels - M-Plant, Hardgroove, Blueprint and Beard Man.

Robert Hood opens the release with "Shadows". It’s classic Hood with a modern twist: segueing between discordant & tough lead lines and more tuneful FM keys and bells - with a kick drum that'll knock the wind right outta yer bowls. Next, Ben Sims infuses "Xotnuc" with his typically wiggy, funky but HARD style that'll have you howling at the speaker stacks and swinging off the rafters.

James Rushkin profers up perhaps the darkest of the set; the taut crystaline atmospheres and deep squelch of "There Was A Time" the kinda post-4AM workout that has you lurking in shadows of the warehouse trying to get away with smoking a doobie as whatever chemicals previously consumed assert their narcotic grip.

James Ruskin then steps up, bringing a dizzying experimental edge to ‘There Was A Time’ that’s championed 25 years of his Blueprint label. Last but definitely not least is the UK techno icon, Mark Broom. ‘The Three Swords’ builds with a beautiful precision that will make you yearn for the dance floor even harder.Mark Broom's "The Three Swords" is full of his typically hefty drums, nagging modular lines and fizzing hats. It's a sound iconic to the UK producer whose excelled in pushing the sounds of our fertile soils onto the rest of the world.

The second EP featuring four electro tracks follows in June, with the third, house EP in July. The compilation "EPM20" will follow after the Summer. TIP!