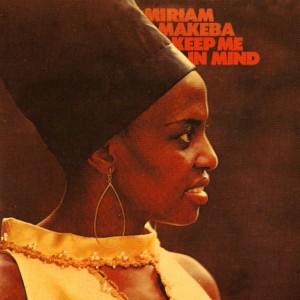 Miriam Makeba’s ‘Keep Me In Mind’ was her last album for Reprise and reflected major changes in both her own personal life and politically within the USA. After becoming a national star globally following the success of ‘Pata Pata’ in 1967, she had fallen out publicly with her mentor and ‘Big Brother’, Harry Belafonte. Makeba made the decision to return to Africa following an invitation from President Sékou Touré of Guinea. In Conakry, Makeba met Stokely Carmichael, President of civil rights organisation the SNCC and they would later marry. “With the Vietnam War, the student protests and the riots in the ghettos, everyone is scared,” Makeba said. “Everyone is afraid that there will be a great black uprising.” Makeba’s concerts were widely cancelled and both her and Carmichael were followed relentlessly by the FBI.

Reprise also terminated her contract but brought in producer Lewis Merenstein for her final recording for the label, best known for his work with Van Morrison on ‘Astral Weeks’. Merenstein suggested two Van songs for Makeba to cover, ‘Brand New Day’ from the ‘Moondance’ sessions and ‘I Shall Sing’ and further songs were added to reflect both the political climate and Makeba’s own memories including Stephen Stills’ ‘For What It’s Worth’ and Lennon & McCartney’s wistful ‘In My Life’. New compositions by Makeba and her daughter Bongi included ‘Lumumba’, a personal tribute to Congolese independence leader, Patrice Lumumba. Reflective of the times, the album is infused with a palpable despair but, as in all of her music, a quiet determination still shines through.

This new reissue of ‘Keep Me In Mind’ is presented in its original artwork and features rare photos and new extensive liner notes by Francis Gooding of The Wire. Remastered from the original tapes by The Carvery.