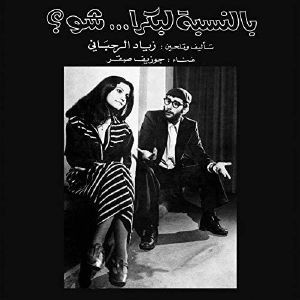 Landmark album by Lebanese cultural icon Ziad Rahbani reissued on vinyl for the first time since its release in 1978. Curated by Lebanese-born music expert Mario Choueiry from Institut du Monde Arabe in Paris, the reissue features original gatefold sleeve, remastered audio and a 2 page insert with a new introduction by Choueiry.

Ziad Rahbani's cult album, Bennesbeh Labokra...Chou? originally released in Lebanon only and mixing Arabic music with jazz, bossa nova and other western influences, is hailed as an absolute classic. The album is the soundtrack to his eponymous play and has been highly sought-after by DJs and collectors around the world.

Bennesbeh Labokra… Chou? is a skilful blend of Arabic music and Bossa-nova - "First Introduction" - the recurring theme of the album, groove - the funky beat of "Second Introduction" and the jazz vibe of "Variation's 3 and 4." It's also interesting to hear an early version of "Al Bosta" which would grace Fairuz's 1979 album "Wahdon" in a faster, funkier version. With a knack for cinematic orchestrations reminiscent of Lalo Schifrin, Ziad Rahbani also brings more complex arrangements to the album on such tracks as "Variation 5" making the album such a rich listening. Undoubtedly one of the most important albums recorded in the Middle East.