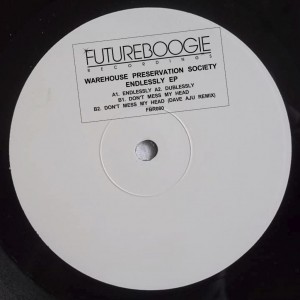 ‘Endlessly’ sets itself at ‘chugger pace’, as its mechanical body funk groove teases out a myriad of micro vocals and steadfast melodies, whilst its counterpart, ‘Dublessly’, goes down the rabbit hole and smothers itself in spring reverbs and delays for a transcendental pilgrimage!

The disco drums of ‘Don’t Mess My Head’ get an industrial touch; shades of electro and New York no-wave are evoked on this powerhouse track, which in turn gets a re-rub from San Francisco’s Dave Aju, who jacks it up a notch, adding a layer of energy and intensity that really seals of this charming release.

Matt says: A Bristol - LA connection here is bridged with the Los Angeles duo debuting on Dave Harvey's impeccable imprint. Totally in keeping with the muscular chug synonymous with the label, it confidently flirts with house and Balearic heads, teasing you out the club, down to the beach and back again before your second pill's even kicked in.