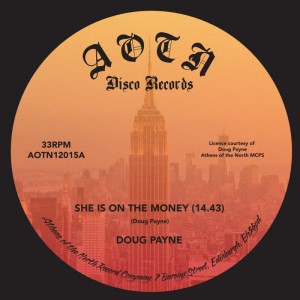 Doug Payne is a graduate of LaGuardia High School of Music & Art (also known as FAME) in Manhattan NY, and Howard University in Washington D.C. He performed as a member of the Sister Sledge tour ("We are Family") has produced several recordings for quite a few East Coast acts and worked as the Music Director for The Dreamlovers, Eddie Holman, The Coasters and the house-band for the Atlantic City television show Chat-24.

We are happy to present two of his self released singles in full on one long 12". She Is On The Money is a A+ Boogie floor filler this previously unreleased in this full version massive 15 Mins long mix direct from master tape. On the flip we have Doug's first single "Holiday" which was previously 45 only and very hard to find, plus some other mixes of "She is On The Money" from a second tape, HEAT!

Millie says: Holidaaaaay! Ultimate boogie dancefloor filler right here for you folks, drenched in soul-disco-boogie goodness. ‘She Is On The Money’ you can’t not move to, it’s impulsive. An absolute must.