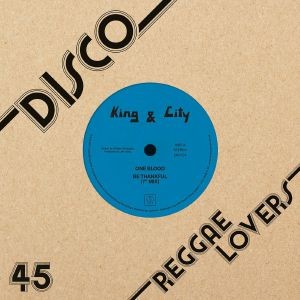 Emotional Rescue and HMV Record Shop (Japan) are delighted to present the first ever reissue of the 7" Mix of One Blood's classic Lovers Rock anthem Be Thankful, as part of their DISCO REGGAE LOVERS series.

While the King & City Records hit was reissued in its 12" form recently (ERC104), this unearthed 7" Mix perfectly distills the bands take on the William DeVaughn soul all-time.

At the forefront of the Lovers Rock movement, the 5 Robinson brothers that made up One Blood took their mix of Caribbean and South London heritage and crafted a uniquely black British sound, grown out of tensions, Sus law, Blues parties and sound system culture that acted as a counterpoint to the Rasta and Rocksteady styles around.

In 7" form, their cover version is taught, tight and succinct, hitting the highs, but retaining the dub. It is backed with a special mix by Tokyo producer Slowly. Closely associated with the esteemed Flower Records, Masato Komatsu aka Slowly also acts as Creative Director for the rebirth of the HMV Shops in Japan, so it is fitting his respectful dub mix dives from vocal opening straight in to the bassbins of a deep dub, this is one for the heads and collectors.