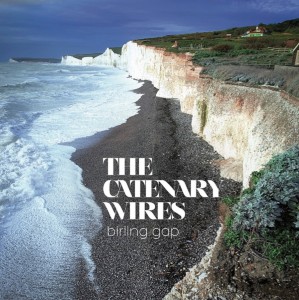 Amelia Fletcher and Rob Pursey love pop songs, but pop songs with an edge. With their early bands Talulah Gosh and Heavenly, they were often dismissed by critics of the time as fey or ‘twee’, but this prejudice has since been revised: some of those sweet fizzy songs were about date-rape, and the band were an influential part of the movement that became riot grrrl.

On their new album as The Catenary Wires, the songs are as strong as ever, full of sweet melody and rich with vocal harmonies. But the tunes are now vehicles for startlingly honest adult concerns: the fractured relationships, anxieties, passions and politics of people who live on an island that’s turning in on itself. Like the Go-Betweens and XTC before them, The Catenary Wires know that pop music can convey dark, sardonic, complex emotions, just as well as it can celebrate teenage angst.

The album depicts England, not just in its lyrics, but in its music. The Catenary Wires have listened to the songs and stories England has comforted itself with over the decades, and re-imagined them. Canterbury Lanes presents a duetting couple, old now and worn down, but still aspiring to put their folk band back together, hoping to rekindle the idealistic flames of the early 1970s. Mirrorball, fizzy with syn-drums and Casio, presents another couple – middle-aged and unattached, who find unexpected love at a retro 80s disco. In the 70s-flavoured pop of Always on my Mind, love appears again, almost by surprise, conjured up by an old photo in a pile of memorabilia.

The opening track, Face on the Rail Line, is a love song set in the now, full of emotion, but shot through with the paranoia that we all feel, living at a time when we are constantly in contact, but rarely communicate the truth. The last two songs on the album, Like the Rain, and The Overview Effect, are anxious romances, set in a fragile world.

The Catenary Wires are now a five-piece band. The other members have impressive musical pedigrees of their own. Fay Hallam was in Makin’ Time, and now releases records in her own name. Andy Lewis played bass in the Weller Band, and has more recently worked with Louis Phillippe and Judy Dyble. Ian Button was in Thrashing Doves and Death in Vegas. These talented musicians elevate the songs, taking the arrangements onto another level.

Barry says: Catenary Wires craft perfectly balanced pop songs, with rich production and a deep rooting in classic British indie music. there are echoes here of the storytelling vocals of Jarvis Cocker or the swooning harmonies of The Beautiful South, but with a casual and personable production aesthetic. Really lovely stuff.

The Catenary WiresI Wish You Were Here Now