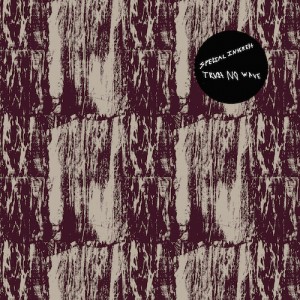 A reissue of the 2016 demo tape by the New Orleans band who combine elements of no wave, glam and industrial music. First time vinyl pressing with bonus track, new sleeve designed by Studio Tape Echo and 8 page risographed zine insert.

Four of the tracks here are raw early versions of songs that would appear in slightly more refined form on their debut album, 2018’s Spiralling. The other four pieces are unique to this release, including a cover version of Italian new wave band Chrisma, raging opener “Disease”, the over-saturated shoegaze-punk of “ATC” and comedown lament “I’ll Never Do Ketamine Again”. The band’s second album The Passion Of (2020) was widely acclaimed and appeared in many album of the year lists. It was recently followed by a companion album of remixes on Boy Harsher’s Nude Club label, with all profits going to NOLA charity House Of Tulip.

“A blistering vision of punk as possibility.” - Pitchfork

“Members Alli Logout (vocals), Ruth Mascelli (synth and drum machine), Maria Elena (guitar), and Nathan Cassiani (bass), together manage to make their instruments and vocals sound like a fight for our existence.” - The Quietus