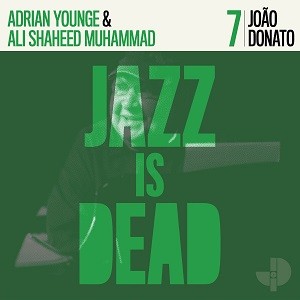 Where’s João Donato? It’s a frequently asked question, referring simultaneously to the physical location and the musical moment he inhabits. A sampling of some of his more descriptive song titles suggests Donato’s comfort with musical hybrids: “Bluchanga,” “Sambolero,” and “Sambongo,” to name just a few. Lacking a formal genre for his style of music, Donato’s is a distinct sound, immediately recognizable from the first few bars of any of his compositions. He was funky back when “funk” was a bad word (listen to either of his 1960s Brazilian LPs, Sambou, Sambou and The New Sound if Brasil, for proof). His compositions are deceptively simple, while his arrangements are harmonically complex, revealing their intricate details upon repeat listening.

Today, Donato brings this flavor, now near synonymous with his name, to a new album in the Jazz Is Dead series with Adrian Younge and Ali Shaheed Muhammad: Joāo Donato JID007. “Donato is one of the greatest Brazilian composers from that golden era. His signature style, simple melodies combined with colorful chordal progressions, establishes a new lane for Jazz Is Dead,” explains Younge. “Joao is one of the most innovative Brazilian jazz composers of the last century. Creating with and learning from this maestro was one of the greatest experiences of my career.”

On the first day of recording, João Donato was so flattered that to learn Younge and Muhammad had crafted some tunes for him to grace that on the second day, the maestro showed up to the studio with a composition in honor of his new musical partners: “Adrian, Ali and Gregory.” Gregory (aka Greg Paul) delivers an effortlessly buoyant rhythm to support Donato’s whimsical and wistful Fender Rhodes. Younge and Muhammad added the flute melody after the sessions, a perfect tribute and compliment to this master arranger, sweet and melancholic at the same time. Building off a sinister interlocking drum and bass pattern, Donato, Younge, Muhammad, Paul and vocalist Loren Oden, assemble a swaying and swirling tune with a romantic mantra, “Nāo Negue Seu Coraçāo,” which translates to “Don’t Deny Your Heart.” Aspirational saxophones dance among cascading monophonic synths, a churning Hammond B3 and cutting fuzz guitar while Donato’s subtle and slinky Fender Rhodes leads the way through the musical maelstrom. Delivered in Portuguese, Loren Oden sings the song’s emotional energy into existence.

If Jon Lucien made a fusion album, it would have sounded something like “Forever More.” Oden’s vocals capture the longing and romanticism of the title, while the rhythm section harkens back to the last album Donato recorded in Los Angeles in 1970, a jazz fusion fore-runner full of pulsing polyrhythms and urgent melodies. “You guys made me like L.A. again,” Donato told Younge and Mohammad towards the end of his 2019 trip to record this album and perform at the Jazz Esta Morto series.

João Donato deserves a place among the legends of Brazilian music, alongside Antonio Carlos Jobim, João Gilberto, Dorival Caymmi, Ary Barroso, and select few others. Ironically, his constant experimentation with different genres – the very essence of his greatness – make him a challenge to classify and perhaps held him back from becoming the household name some of his peers became. Asked how he would describe his own work, he says, “It’s my style of music, the way I think about [music]. I don’t even think about it, it’s just the way I do things. I don’t know if it even has a name.” Donato has finally received long overdue accolades for his contributions to date. An archetypal “musician’s musician,” Donato’s stepped out of the shadows more recently, recording at an unprecedented rate and collaborating with a variety of musicians, from Brazil and beyond, old and young. Still going strong at over eighty years old, the late praise and recognition is finally coming for the artist who Claus Ogerman offered to arrange an album, who Antonio Carlos Jobim called a genius, and who no other than João Gilberto claims invented the bossa nova beat

LP
A1. Não Negue Seu Coracão
A2. Aquarius (Bring Her Back Home)
A3. Desejo De Amor
A4. Forever More
B1. Sua Beleza E Beleza
B2. Liaisons
B3. Adrian, Ali & Gregory
B4. Vermelho Quente
B5. Conexão