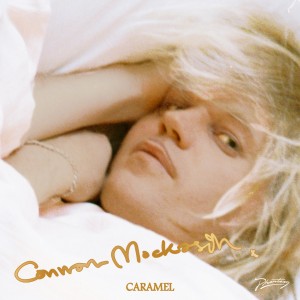 New Zealand via Paris / London pop sprite Connan Mockasin follows up the widely acclaimed oddball-psych of 2010’s 'Forever Dolphin Love'. 'Caramel' boasts a unique brand of mutated, lustrous soul that was almost wholly self-recorded over a month in a Tokyo hotel room. The new album explores different regions of Mockasin’s singular galaxy, guided by his truly adventurous songwriting that favors reconfigured pop structures with a skewed funk sensibility. 'Caramel'  offers us not just soul but a liquefied brew of blues, funk, ambient and folk with pronounced Oriental and Gallic timbres, all laced with an uncanny air of bliss... 'Caramel' has hints of Scritti Politti's exquisitely stitched soul, or of Prince - if the Minneapolis legend had spent time in Canterbury, the epicentre of South East England's progressive psych / prog scene during the late 60s and early 70s, where the likes of Syd Barrett and Kevin Ayers began their own musical journeys.

And if that wasn't all enough to get your ears round, then it's a concept album as well, kinds: "The concept is that it's actually an album," says Mockasin. "It starts with the dolphin (from 'Forever Dolphin Love') leaving, and the boss (the man) who is so in with love with the dolphin is sad, and then it kicks into the new album, and he is happier. But there's a car race and a crash."