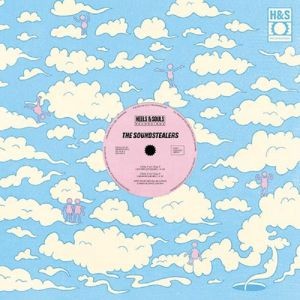 Following the success of Special Touch - Garden of Life, Heels & Souls Recordings kick off their 12” reissue series with an EP of digger delights from Frankfurt’s under-the-radar production trio of Manfred Holz, Michael Buchner and Jürgen Blömke, complete with a tropical rework from London duo, Good Block.

One side contains the instantly absorbing, late '80s electro nugget, 'Steal It An' Deal It', from the aptly named The Soundstealers. Cruisin the slow lane at 100BPM, an idiosyncratic blend of samples, sound effects and percussive flourishes, underpinned by chest rumbling bassweight, guarantees dancefloor bedlam whether drawing for the dance or dub mix.

On the flip, you’re treated to obscure acid chugger ‘Amazonia’. Originally created for the opening credits of a ‘90s German nature documentary ‘Wunder Wildnis’ (seriously), the breakbeat-driven dance mix stomps through the undergrowth, acidic arps and pan flutes fizzing across the forest canopy. Heels & Souls pass the baton to London’s Good Block for the home stretch, the tropical twosome reworking the bassline and sprinkling some synth wizardry for a remix that grooves off over the horizon.

These hard-to-find, pricey gems have been fully licensed from the trio, with weighty remasters courtesy of Cicely Balston. 20% of profits from Heels & Souls Recordings and Prime Direct Distribution will be donated to Papyrus, a UK charity dedicated to the prevention of young suicide.

Patrick says: I love it when a label do everything right. Not content with putting on a belting party with a charitable heart, Heels & Souls migrated into the release sheets with first, the Special Touch LP (!) and now freshen up a pair of deep diggers' nuggets from the Frankfurt underground. I've been playing 'Steal It An' Deal It' most sets for the past 5 years (thanks Basso), and seen its price steadily climb - so big ups to the guys for the safety copy. The flipside, "Amazonia" is new to me, but absolutely class. Rainforest house at its finest, this future primitive weapon kills it in its OG form as well as via a mega edit from the Good Block family. Killer!