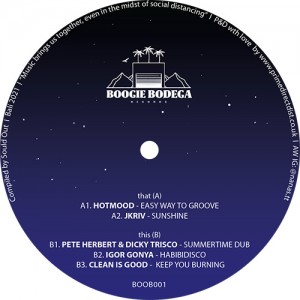 Sandy Grooves Vol.1 is the debut compilation release from Boogie Bodega, a newly formed label based in Bali set up by Mexican Disco wizard Sould Out. Comprising of some of the most sought-after producers within the Disco & Edits scene of the last years, Sandy Grooves vol.1 tickles all the Disco senses with something for everyone. From laid back Balearic inspired incarnation to a more uptempo dance floor heaters, this comp focuses on the full spectrum of the Disco & Funk arena.

Opening things up, “Easy Way To Groove'' could not have a better title for the music to match, it's a definite “does what it says on the tin” kind of vibe. Hotmood works his magic once again with this bass led stomper, tidy guitar licks and cinematic string section that’s sure to get butts off seats and wiggling

On the B side, Disco Deviance Pete Herbert & Dicky Trisco compliment the more downtempo offering of this selection with a dubbed-out guitar laden trance inducing gem that is sure to spin a few heads. Following that, Igor Gonya’s “Habibidisco” holds its place as a romantic vocal Disco funk journey through Arabia with plenty of energy - another one for the dancefloor crew.

Finally, “Keep You Burning” by Clean Is Good is a mid-tempo swinger that’s sure to heat up the listeners ears. Sleek, smooth vocals, classic disco beat and undeniable funky guitar - I dare you not to groove to this one!