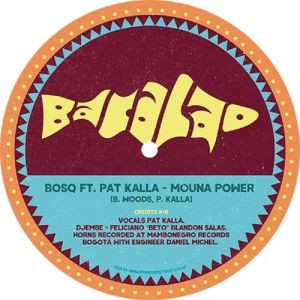 Bosq & Pat Kalla have been traveling parallel paths from across the Atlantic ocean without ever intersecting for too long. They have both been deeply involved in the modern / retro Afro Disco scenes in their respective countries but it wasn’t until the legendary French producer & label head GUTS asked Bosq to remix Pat Kalla & Le Super Mojo “Canette” that they met musically. That remix was received so well by the public as well as the artists themselves that they decided to work on an original track together.

“Mouna Power”, sung in a mix of French, English & the Cameroonian dialect of Pat’s heritage places Pat’s smooth vocals over Bosq’s raw & heavily layered, percussion & horn driven Disco Funk. The Dance Dub strips back some of the vocals, pushes the percussion even further up in the mix, and stretches out the grooves, focusing more on the infectious B-section than the original. This makes for a perfect body moving excursion that will let the dancers delve deeper into the groove while being carried along by the horn blasts and Pat’s chanted vocals. The record features the renowned horn section of the Bogota Orquesta Afrobeat, and djembe work from “Beto” Salas, a world class percussionist from Turbo on Colombias Caribbean coast. Bosq as usual handles all the rest of the percussion, instrumentation & production.