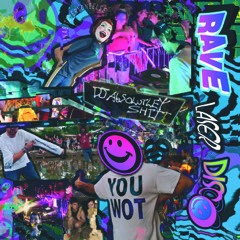 Salford '95: a rave devotee with a penchant for Air Max cops an MPC1000 off the back of a lorry & a cheeky lend of a Korg MS-20 from a local sputnik huffer, feverishly setting to work with a battered pile of hardcore breaks and mad love for the dancefloor. A bunch of explosive warehouse cuts are rapidly thrown down before he switches off his machines and heads off down Bowlers for the usual weekend pleasantries. Returning many days later and trounced off a wild combo of mitsis and brown acid, DJ AB is devastated to learn that a crew of lads from Hyde have ransacked his bedsit scrounging for his last ten bag - leaving the recently recorded DAT nowhere to be seen. Thought to be lost this whole time, Red Laser CEO, Il Bosco was 'unbelievably buzzing' upon happening across the item at one of his frequent car boot forays. A super limited white label EP containing 2 dancefloor bombs and a couple weirdo tracks were pressed and hawked in record time back in 2017, and now change hands for top dosh. On this, slightly more official release, Il Bosco (operating strictly within the original blueprints) has revisited these epochal rave musings and, alongside some help from extended Red Laser fam has tweaked em for modern playage.

"A Night At Shelley's Laserdome"; first released on that white label teaser, now the stuff of nightclub folklore - the original DJ Ab mega-anthem given a proper release; destroying the discogs market value of the white label whilst delivering a bona fide and timeless slice of dance music history to those that need fulfilment. Expect rushing vox, tingly melodies and pure ruffage breaks. It's been touched up for maximum grunt too...Tidy! The "Xr2 M6 Mission" sees RL cru get in on the remix tip! In house mastering specialist, LVLs beatmaker and probably the most underrated producer in the universe, Metrodome joins old guard rukus maker, Begin aka James Holroyd and gets frisky after some warm tins and slack zoots in Bosco's studio. Conjuring up a focussed remix that cracks and thuds HARD we like this new version as much as the OG. Two pharaohs please Dudderz - sharpish!

Side B's "Cut Those Tory's Down To Nowt", lauded for causing the infamous White hotel 'flasher' to vacate his crow's nest and hit the dancefloor unabashed, it's hard to ignore that rugged bassline and those gliding synth stabs. Throw in some proper b-boy biznis like live scratches and vocodered vox and it's a veritable tapestry of warehouse music wondertropes that'll find mass appeal at large late nite gatherings. Concluding, “Bang Into Breakbeach”, sourced from a crusted minidisc and dated sometime around 2003 is a track for the smokers and the after party. A chilled instrumental laced with seductive horns and a baggy break, it harks back to that original Grand Central sound and proudly dons its favourite pair of Nikes for the occasion. Head nodding goodness from beginning to end and a beat so catchy fuckin’ Jay-Z’s queuing up to drop a verse or two on it.

Matt says: Crashing into the rave revival head first; four authentic hardcore breaks numbers from a total OG. The sleeve is made up of photos from the Ill Eagle Raves at Pomona Island between 2017-2019. There's a full page comic from one of the city's greatest, unsung, pop artists. This is a true piece of history from the MCR underground. Every raver needs one.

A1. A Night At Shelley's Laserdrome
A2. Return To Shelley's (Metrodome, Ill Bosco & Begin's Xr2 M6 Mission)
B1. Cut Those Tories Down To Nowt
B2. Bang Into Breakbeach