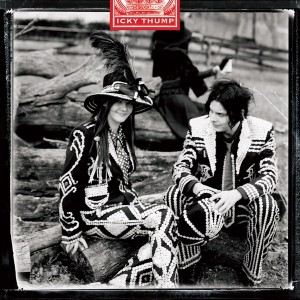 This is the first time the White Stripes have ever recorded and mixed an album at a conventional modern studio. It was still, however, recorded to reel-to-reel, and mixed to tape in complete analogue fashion. It was recorded in three weeks - the longest they've ever spent working on a record. Here's some more interesting facts about the album, "Icky Thump" has no piano performances or piano-based songs (unlike it's predecessor which was mostly written and performed on piano). It has the most guitar solos Jack White has ever recorded to tape. It is the first time the band has collaborated with horns and bagpipes. "Icky Thump" contains the first spoken dialogue song to appear on one of their albums; "Rag And Bone". It is the second longest album of the Stripes pantheon thus far. Second to "Elephant" with more than 48 minutes in running time. The album's title is a morphing of the phrase 'Ecky Thump' which is an exclamation of surprise or wonderment in Northern England. The synthesizer used in the title track was also used on the song "Telstar" recorded by Joe Meek.