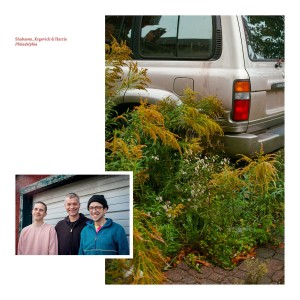 Shabason, Krgovich & Harris are Joseph Shabason, Nicholas Krgovich and Chris Harris. Joseph Shabason is a Toronto-based multi-instrumentalist (sax, flute, clarinet, keys), composer and recording artist. He has played, recorded and toured in the bands Destroyer, The War On Drugs, Andre Ethier and DIANA. Two of the albums that he plays on (Kaputt and Poison Season) were shortlisted for the Polaris Prize and the self-titled album from DIANA has been long-listed for the Polaris Prize. Kaputt was voted the No. 2 album of the year by Pitchform Media and Poison Season was also nominated for a Juno in 2015. He has released two solo records Aytche (2017) and Anne (2018) and has composed music for commercials, TV and Film. Reviewers include Pitchfork, Now Magazine, Music Works, Exclaim, NPR, Aquarium Drunkard, CBC, Toronto Star, The Guardian, Paste Magazine. Nicholas Krgovich is a songwriter and multi-instrumentalist from Vancouver, Canada. Described by the legendary Robert Wyatt as “quite beautiful, very touching… human” he has been releasing records and playing shows since 2002. He formed his first band P:ANO while still in high school, they made a string of acclaimed chamber pop albums, which led to recordings with the girl group-inspired GIGI, the icy displacement of the R&B informed NO KIDS, and most recently (and consistently) the singular pop dreams released under his own name.

Even though the material is often wildly diverse, there is an unmistakable sense of Krgovich’s deep commitment to exploring the endless possibilities of pop, his discerning ear for sonic detail, and an ambition that occasionally borders on the absurd. With songs that owe as much to the Great American Songbook as to perennial favourites like Sade, Prefab Sprout and Stephen Sondheim, Krgovich has been moving between genres, forms and instrumentation, creating a rich musical world comprised of intricate vocal melodies, lush orchestral arrangements, layers of analog synths, slinky guitars and tight rhythms of the human (and inhuman) variety and an inimitable lyrical style that is as reflective and honest as it is wry and idiosyncratic. He has toured extensively throughout North America, Europe and Japan and collaborated with artists such as Mount Eerie, Nite Jewel, Amber Coffman (Dirty Projectors) and Dear Nora. He has participated in a residency at the Banff Centre for the Arts, written a prison break musical for Vancouver’s Push Festival, and contributed songs to a myriad of film and television productions. Chris Harris has toured the world as a member of Destroyer’s band.