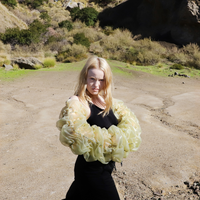 LA-based producer KUČKA’s debut album, ‘Wrestling’, is a personal and intimate collection of songs - but it is also relatable in its evocation of universally human themes and experiences. In her own words, “I like the idea of someone else hearing the songs and being able to wear them, to transfer the lyrics to their own life.”

She has worked alongside a number of high-profile collaborators, producing and singing on tracks with artists as diverse as Flume, A$AP Rocky, Vince Staples, SOPHIE, Fetty Wap and Kendrick Lamar.

On ‘Wrestling’, the intricate production of KUČKA’s earlier EPs is placed in the service of her most beautifully rendered songs to date. While her music has often leaned toward the experimental, ‘Wrestling’ is marked by a conscious effort to produce tracks that work as ‘songs’ (she wrote over fifty pieces before narrowing them down to the eleven here): lyrics are personal and literal, their open emotionality contrasting with the simple but hyper-digital production within which they are embedded. As with KUČKA’s previous releases, the album is self-produced.

There is no definitive genre uniting the album beyond its broadly ‘electronic’ palette but the open emotionality of the album’s lyrics contrasts with the simple but hyperdigital production within which they are embedded.