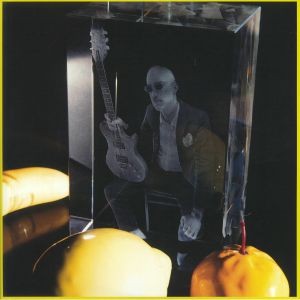 Who is Harvey Couture? Some say he’s a survivor of French pop music’s sun-soaked synth-pop era of the early 1980s, others that he’s a more suave and stylish Serge Gainsbourg for the nu-Balearic era. There were even rumours circulating that he’s a musical mobster from the Cote D’Azure: a shadowy member of the mafia who deals in synths, drum machines and fretless bass guitars rather than guns, money and drugs.

In truth, not even Leng Records knows much about the man behind the moniker, though his vividly kaleidoscopic, retro-futurist debut album, Scellé En Cristal, does offer a number of crafty clues. Whether listeners will make the necessary deductions to solve the mystery remains to be seen; regardless, it’s the music that matters, and on that score Scellé En Cristal simply cannot be faulted.

The influence of languid, sunset-ready European pop records of the 1980s – those cuts that would later become sought-after amongst dusty-fingered collectors of Mediterranean music – is another recurring feature of Couture’s cultured but joyous debut album. It can be heard amongst the drowsy guitars, yawning bass and tumbling lead lines of ‘Look Within’, the pleasingly laidback ‘Invincible Line’, the elastic bass, fluorescent synth sounds and stuttering machine drums of ‘Marche’.

Yet Couture is no one-trick pony. Horizontal and loved-up moments of a more downtempo hue can be found scattered across the album, with the enveloping ambient awe of ‘Les Portes’ – all swelling chords, gentle melodies and atmospheric field recordings – and slowly unfurling ‘Whale Song’ both lingering long in the memory.

Harvey Couture may not be ready to step out of the shadows just yet, but his music most certainly is. We have a feeling that Scellé En Cristal is just the start of the mystery monsieur’s musical journey.