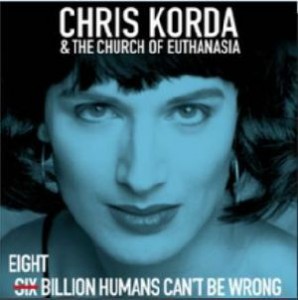 By the time Chris Korda broke one small, cis section of the internet (the Boiler Room comment section) the politically minded agent provocateur had been courting controversy for close to three decades. As the co-founder of the Church Of Euthenasia alongside Pastor Kim, Chris had promoted restoring the balance between Humans and the other remaining species on the planet via mass population reduction - Save the planet, Kill Yourself. As the world's only anti-human religion, the organisation encountered a whole load of opposition, not least when they took out advertisements for a suicide helpline, which helped you to commit suicide. Jerry Springer dubbed them a suicide cult, and their dadaist tactics bemused and enraged the minds of middle America in equal measure. But behind the scenes, behind the sensationalist headlines, Chris Korda was turning the fucking party with a string of essential techno, essentially militant club cuts, most of which are captured here. Highest grade tech-funk with heavily politicised messages and contributions from Chicks on Speed, Michelle Grinser and DJ Naughty. Anti-consumerist, anti-capitalist and heavily ecological hits for the thinking dancefloor.