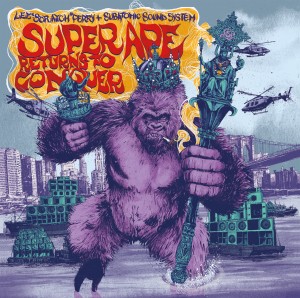 Lee "Scratch" Perry re-makes his own classic album 40 years later? It sounds crazy but after his hugely successful tour for the 40th anniversary of his seminal 1976 dub album Super Ape produced at his famed Black Ark home studio, Grammy winning Jamaican artist Lee "Scratch" Perry rebuilt the entire album with NYC's Subatomic Sound System proving not only that he was 40 years ahead of his time but that at 81 years old, he continues to innovate and push the envelope of reggae and dub, genres he pioneered in the 60s and 70s. Largely known as the mentor to Bob Marley, shaping his vocal style and philosophy, while producing and co-writing Marley's early classics like "Sun Is Shining", "Kaya" and many more, Perry's influence has transcended reggae

For the past 7 years he has toured with NYC's Subatomic Sound System, his go to band for recreating his Black Ark studio sound live on stage in new exciting ways as a one of a kind hybrid of beat heavy electronics and live musicians including original Black Ark studio percussionist Larry McDonald. Subatomic Sound System has been pushing the envelope of electronic music in combination with reggae since their inception in 1999 mashing up everything from dub to dancehall with hip hip, dubstep, cumbia and the like. Together with Perry they have performed as featured artists at Coachella, Red Bull Music Academy, and the keynote speakers Ableton live their Berlin summit meeting this year, highlighting their innovative use of music software.

Lee "Scratch" Perry says he gave his protege Bob Marley reggae music as ransom so he could be free to make dub. In dub, the producer is the star organizing and remixing the music with drum and bass in the forfeont and tweaking knobs and faders, adding effects like a jazz improvisation. Perry was arguably the first producer to ever appear as an artist on an album cover. In the 1970s, the idea of a producer rather than a singer or musician as a star, seemed crazy, but Perry is known for being crazy and looking across the world of music today where DJ producers are the stars of electronic music, it is clear he is rightly acknowledged as a visionary as well.

There are many stories to be told but this album follows on the mission of the tour which has the goal of reaching out to old fans and new fans as follows...

1) As sound system culture continues to expand globally with reggae and beyond, these are DJ friendly heavy weight versions of Scratch material that makes sense in the 21st century and represents what we have successfully been building with him live the last 7 years, namely that it sounds like the classic Black Ark vibes in the high frequencies but in the low end, it has the weight and punch of electronic music, dubstep and hip hop, that gets people moving. Scratch started his music career as a dancer so he loves to get a party started even at 81.

2) The album shows that Scratch was 40 years ahead of his time with Super Ape at 81 more relevant to youth culture than ever. The original Burning Man, the original producer as artist, the guy who laid the blueprint for reggae and dub that would inspire punk and electronic artists and producers world wide. What guy can Keith Richards call "the Salvador Dali of Music" and Bounty Killer just last week hail him as "the greatest Jamaican artist of all time" and Basquait call him a significant inspiration for his paintings? He transcends not just reggae but even music. And he's still at it!