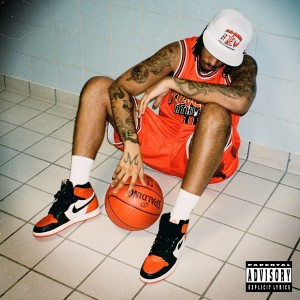 Following the hard-hitting return single “Anxious” and a slew of mysterious ‘West Gazette' posters appearing around the UK hinting at the announcement (including Birmingham, Manchester, Glasgow, Bristol and London), West London’s AJ Tracey last night assumed the character of a rising young basketball player, appearing in a live-streamed press conference to reveal his next move: a lucrative deal with major franchise ‘Revenge Athletic’ ahead of a crucial playoff game. The broadcast ended with the true reveal: AJ’s highly-anticipated sophomore album "Flu Game" will finally arrive on April 16th 2021.

Always pushing boundaries with his creative output, AJ’s campaign draws influence from the story of Michael Jordan and his Chicago Bulls team in the late 90s - with "Flu Game" referencing one of MJ’s most memorable championship games - where he overcame a nasty bout of food poisoning (brought on by a dodgy takeaway pizza) and took the Bulls to the championship. Revenge Athletic are a franchise on the brink of a massive championship win, and AJ is their new star. All we know for now, is that AJ is about to take us into this new world, as he dons the number 10 jersey, and states he’s “ready to get going [and] do what I’ve always done.”

Available for pre-order now with an extensive range of Revenge team apparel, "Flu Game" sees AJ showcasing twelve brand new tracks, with tantalising features including Kehlani, T-Pain, SahBabii, NAV and Millie Go Lightly. On the production front, AJ calls on regular collaborators Nyge, The Elements, Kazza, AoD and Remedee. The project also features the UK top five singles “Bringing It Back” with Digga D, “West Ten'' with Mabel, and the Platinum smash “Dinner Guest” feat. MoStack. The album news and its immersive accompanying campaign is sure to whip fans into a frenzy.

Barry says: Alongside a dazzling array of guest stars, AJ Tracey reveals his newest LP, 'Flu Game'. Expect skittering trap percussion and huge sub-bass beneath Tracey's perfectly paced vocals, setting the scene perfectly for an artist at the start of a lengthy and lucrative career.