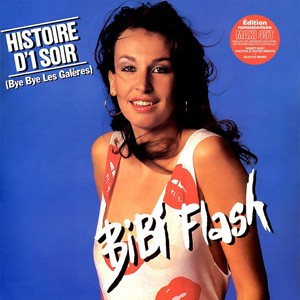 An absolutely huge French boogie anthem, which has taken an ETERNITY to get here, finally arrives. A perfect example of the 80s scene, with lyrics endorsing liberty, youth and freedom sung by Bibi Flash aka Brigitte Gasté.

With its light lyrics and mythical chorus, its sugar candied euphoria and irresistible disco-rap style; this track, produced by Philippe Renaux (Holly Guns, Clever, Pianola etc) and released in 1983, is a sincere and high watermark of its time, during which the children of the Summer of Love and May 68 criss-crossed Paris in search of endless nights, pleasure and freedom.

A prized and rare record repressed by Barbecue in its full 12’’ version, with the original, the Disco Mix, instrumental and the acappella, accompanied by a new modern and vibrant edit by French house producer Blutch.

As a bonus an insert with exclusive texts and photos by Bibi Flash and Philippe Renaux is presented in a melee of bright colors, revealing the spirit of these good old times. An incredible unit that won't hang around our shelves for long.

Matt says: Killer French boogie that everyone's gonna get down with. It's taken a painfully long time to get here, but now in fully expanded form you can revel in its sugar sweet glory.