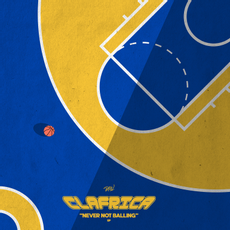 Sicilian-born, UK-based DJ and producer Clafrica has been heavily influenced by the dub and reggae sounds from a very early age and the geographical proximity to Africa allowed him to soak in the various cultures that exists in Sicily - moulding him into the musician that he is today. Fast forward, he makes his Darker Than Wax debut with Never Not Balling - a dazzling sonic exploration of nostalgia, vintage circuits, and basketball. Owing his first musical exposure to the Space Jam soundtrack and 90s basketball video games, as well as his first time seeing a DJ courtside at the And1 Mixtape European tour, Clafrica’s love of both music and basketball have always gone hand in hand. After honing his craft as a DJ and studio engineer from as early as 12 years old, and moving from Sicily to Edinburgh in 2010 to further his studies of sound design, Clafrica has emerged as a certified production mad scientist and studio boffin in his own right. Fast forward to 2019, Clafrica emerged as one of the most exciting new producers on the scene with a string of releases on labels such as Axe On Wax, Vakum, Deep&Roll, and Perpetua.

A collection of tracks created over the last 2 years, Never Not Balling is one of Clafrica’s most well rounded offerings to date, expressing a number of moods and emotions through his signature style, all the while showcasing the artist’s mastery of studio techniques and hardware. In the theme of fusing his love of sport and music, ‘Skip Thru Dat Lane’ is a midlockdown electro reflection

on overcoming difficult times, with the artist envisioning himself dodging negativity like Allen Iverson skipping through the lane. On the heavier side, ‘U Can’t Guard Me’ is a pure release of stress and frustration, driven by unstoppable hi-hats and a punishing bassline. ‘Halftime’ fuses the sound of old Amiga sound chips with raw drum machines as an ode to the basketball video games of Clafrica’s youth. At every point in the record, Clafrica’s sonic depth and stylish approach is on display, driven by raw and unrelenting dance music energy.