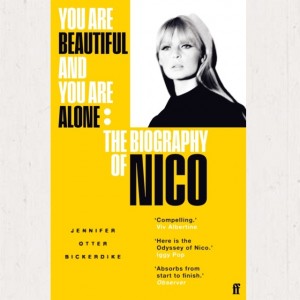 A redemptive, myth-shattering biography of one of the twentieth century's most underestimated creative and artistic forces.

'What I have in common with Nico is the understanding of her furious frustration at not being recognised.' - MARIANNE FAITHFULL

The real story of Nico is one of determination, self-destruction and belief in one's artistic vision, at any cost. Nico was an ever-evolving myth, an enigma that escaped definition. Born Christa Paffgen, Nico grew up in war-torn Berlin before being scouted by a fashion photographer in her early teens. At age twenty-seven, she became Andy Warhol's newest Superstar, securing the position of chanteuse for the Velvet Underground. Though she is primarily remembered for contributions to their seminal debut album - and her relationships with Brian Jones, Bob Dylan and Jim Morrison - her own artistry and influence have often been overlooked.

Nico spent most of her career as a solo artist on the road, enduring empty concert halls, abusive fans and the perilous reality of being a drug addict. Yet beneath the superficial denigrations and one-dimensional myths was a complicated visionary determined to make art that was truly her own. In You Are Beautiful and You Are Alone, defying the sexist casting of her life as the tragedy of a beautiful woman losing her looks, youth and fame, Jennifer Otter Bickerdike cements Nico's legacy as one of the most vital artists of her time, inspiring a generation of luminaries including Bjoerk, Morrissey and Iggy Pop.

Containing over a hundred new interviews and rare archival material, this is an empowering reappraisal of an underappreciated icon.

Javi says: One of the most enigmatic, problematic, and chameleonic figures in alternative music's history, who finally gets the biography she deserves. Iconic - Controversial - Nico.