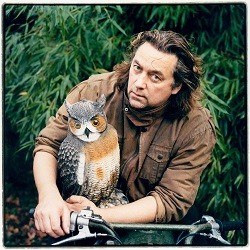 Straight Outta Caledonia is the first commercially available “Greatest Hits” of the outsider songwriter Jackie Leven, an artist who has largely remained in obscurity in his native Scotland despite being one of the greatest wordsmiths – and singers – it ever produced. A well-travelled musician who began making psychedelic, progressive music in the late 60s before emerging as an epic storyteller full of pathos, humour and humanity in the 90s, Leven lived and wrote like many of the fragile, gregarious characters of his songs; large, full of life and empathy. Leven passed away in 2011 after recording 30+ albums under different guises or with his briefly successful New Wave band Doll by Doll. Straight Outta Caledonia is a compilation collated by Night School Records on its Archival label School Daze that seeks to introduce Leven’s music to new generations. In an age of isolation, alienation and loss of visceral experience, Jackie Leven’s music can be massive and welcoming. It feels connected to some universal humanity and vibrates with vitality. His songs are often full of tragedy and comedy simultaneously, cutting straight to the heart, often plugging directly into the nervous system of the listener. His lyrics are rich, dense with imagery that can veer from apocalyptic to the comically banal in a sentence, with a songwriting panache that can be heavy handed to almost bursting point before skewering the song with a clownish, warm punchline.

His productions ranged from Bob Dylan’s Rolling Thunder Revue style rock band orchestrations with strings and organ as on the epic Ancient Misty Morning or they could be pared down to the purest form of folk song as on Poortoun: Leven on stage alone with an acoustic guitar, albeit played with a mastery of the instrument that he often only hinted at. Musically his sound can bend traditional structures or stay completely confined within them yet still forever push towards an ecstatic release, as on the cinematic Snow In Central Park. The most exciting, jaw-droppingly effective tool at Leven’s disposal was his voice.

A multi-octave instrument that, though damaged during a savage assault in Fife, he used with flair; he had both a brazen disregard for the rules and a deep humility, all of which is evidenced with every phrasing. A baritone that could flit up through the register – always touched by his gentle Kirkcaldy accent – it’s the prime delivery method for his songs. Leven’s voice enabled him to inhabit the characters in his songs to an uncanny degree, a skill that in turn enables the listener to empathise with them and, subsequently, the singer. It’s most evident in stand out song The Sexual Loneliness Of Jesus Christ, a breathtaking re-telling of the life of its protagonist, not as a pure, sinless messiah but as a sexually frustrated, solitary man condemned to an existential loneliness no one else will ever feel. In many ways the track is the archetypal Jackie Leven song.

Produced by Pere Ubu’s David Thomas, what strikes the ear first – after the samples of unemployed workers in Glasgow following the closing of the Clyde shipyards – is the audacious, rhythmic tremolo effect Leven employs through the verses before the production opens up to allow Leven’s vocal to lift into a soar, a freeing glide powered both by the force of the singer’s chutzpah and the inherent, doomed destiny of the protagonist. With any other singer such subject matter could come across as gauche or worse, pretentiously sonorous, but Jackie Leven’s genius was such that he could be this cinematic and brazen while touching something elemental and true in the beholder. It’s a skill evident in every song on Straight Outta Caledonia, the trademark of a songwriter who revelled and excelled in intensity with a lightness of touch. In his lifetime, Jackie Leven toured, wrote and recorded at a ferocious rate. He recorded under aliases to avoid record contract restrictions, played house shows in Europe after or instead of official concerts, events which were often spoken word story telling masterclasses as well as performances of his often bewilderingly dense songbook. His music has traditionally been catalogued as “folk” music and has been largely banished to a small, dedicated group of international fans and apostles both private and well known, like author Ian Rankin or Glenn Matlock. Since his passing in 2011 however, there has been a growing recognition amongst a newer generation, with artists like James Yorkston or Molly Nilsson publicly stating the influence of the unsung troubadour on their own craft. Jackie Leven’s fairytales for hard men are often forensic deconstructions of masculinity, sad and ecstatic, light and shadow, always endlessly rich, a resource as bountiful as Leven himself’s human spirit undoubtedly was.

Barry says: 'Straight Outta Caledonia' is undeniably mad. It's a brilliant mix of deep Scottish folk music, but imbued with the spirit of stadium rock and 70's psychedelia. Gigantic instrumentation comes out of nowhere, following on from the most downplayed slice of acoustic reverie. A 'best of' that almost certainly could have been twice as long. Maybe that means we'll get more in the future? Here's hoping.