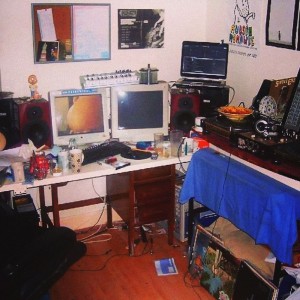 Back in 2008/2009 I was working behind the bar at Font, DJing three times a week (have records will travel) and living near the yellow bricks in Hulme. Then, as now, I was digging disco and Balearic records, but a good friend used to stop by on the way back from Hit n Run every monday. The gal hipped me to Hudmo via that mega twist on Tweet's "Oops" and the insane 8bit brilliance of 'ZOo00OOm' and ever since I've had maximum respect for the Scottish DJ and producer. Way ahead of my curve were WARP, who heard his 2006 digital release "Hudson's Heeters Vol. 1" and quickly wrangled him into their roster. International superstardom followed, but there was never a vinyl version of this set. Dive in for a full frontal assault of baffling breakbeats, technicolour fx abuse, scratches, samples and supercharged boom bap.