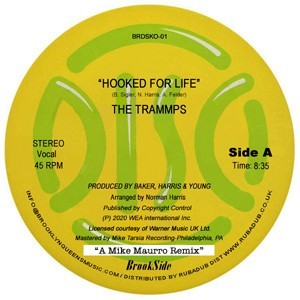 Modern day disco remix king Mike Maurro strikes again! This time, Atlantic Records and Brookside team up and have Mike tackling two classic tracks by The Trammps: “Hooked For Life” & “Soul Searching’ Time”. “Hooked For Life” was released on Atlantic’s “Exclusive Disco Series” of promo only 12”s in the U.S. back in 1975 and “Soul Searchin’ Time” was also released as a promo only 12” in the U.K. on WEA’s ultra rare “Disco Special Cut” series. Both tracks get the 'Maurro Remix' treatment with extended intro’s, instrumental passes and breakdowns, and finally mastered in Philadelphia by Mike Tarsia of the world famous Sigma Sound Studios. Boom! *GLITTER BALL EMOJI*

Sil says: Big room disco bangers that don't smell of cheese. The groove is solid but they are less obvious that some of the other shite you hear peddled to death. I'm onboard.