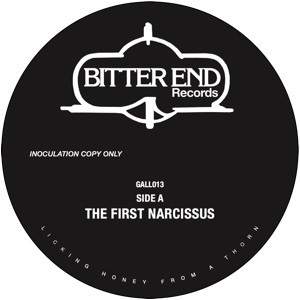 "The First Narcissus" incorporates elements of "Narcissus" and injects Parrot's wobbly, disjointed rhythms into the mix; slightly tribal, slightly minimal - 100% Parrot!! This could simmer away on any Ibizian terrace early evening or equally soundtrack a coital club throb come 5AM in the morning....

"Jealous Groove" takes the instrumental stems of "Jealously" and clubs them up somewhat, adding some swooshing fx, extra perx and toying with the arrangement somewhat.

Alternative versions of these killer album tracks which offer up the opportunity for creative DJs to tease in the originals over a long extended session, Body & Soul / Danny Krivit style...

Matt says: I'm a huge fan of Parrot, especially when he dons this Bitter End alias. I like the way he's slowly teased out elements of Roisin' world-beating album from last year and transformed many of its radio friendly hits into stone cold clubland heaters. Here's another two from the Sheffield star!

A. The First Narcissus
B. Jealous Groove